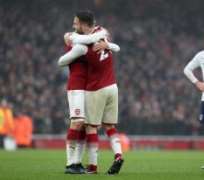 Tottenham suffered a 2-0 defeat in the north London derby at the Emirates, with Shkodran Mustafi and Alexis Sanchez doing the damage with the first-half goals. Here are five talking points.

Tottenham's ability to play out from the back through their three centre-backs is a key aspect of their build-up play, but the trio were effectively stifled at the Emirates.

When Jan Vertonghen, Eric Dier or Davinson Sanchez had the ball, Arsenal's Mesut Ozil, Alexandre Lacazette and Alexis Sanchez matched them man for man, initially standing off them to block any forward passes but then moving forward to apply pressure when the right moment presented itself.

Dier saw an early pass intercepted by Lacazette just outside his own box, and Vertonghen also gave the ball away in a dangerous area soon after.

It forced Spurs to play long far more than they would have liked, and starved their creative players of opportunities to receive the ball on the deck.

The result was waves of pressure throughout the first half, with Mauricio Pochettino's side struggling to get out of their own half or keep the ball.

Arsene Wenger had succeeded in neutralising, or at least limiting, one of Spurs' strengths.

With their backs firmly to the wall for the majority of the first half, Tottenham rode their luck for a while. On two occasions, through balls between Vertonghen and Ben Davies freed an Arsenal player but the hosts were unable to capitalise.

Wenger's side eventually took a deserved lead, but the goal itself was highly controversial.

When Alexis Sanchez latched onto a crossfield ball and chested it down past Davinson Sanchez, the Colombian defender seemingly made a perfectly good tackle. But referee Mike Dean adjudged that he had pulled the Arsenal man's shirt and awarded a free kick.

It looked an incredibly harsh decision at the time, and even more so a few moments later as the home side scored from the free kick, Shkodran Mustafi heading home from Ozil's free kick.

Tottenham had justifiable cause for complaint, but they deserved to be behind and should have defended the set piece better.

They were then undone too easily again when Arsenal doubled their lead shortly before the break.

Another through ball dissected Vertonghen and Davies, freeing Lacazette, and when he put in a cross for Alexis Sanchez, Kieran Trippier initially tracked him but then stopped, with Sanchez firing into the roof of the net at close range.

Toby Alderweireld has always not been in his best form this season but he was missed today – both in and out of possession – and the fear is he will continue to be missed between now and Christmas.

Tottenham's homegrown hero went into this match having scored six goals in his previous five Premier League north London derbies, netting at least once in each clash.

However, he was unable to continue his run against Spurs' bitter rivals today and endured a tough afternoon in general.

Largely denied service, he still managed to test Petr Cech on two occasions in the first half, and in the second period a low strike was well blocked by a sliding Mustafi.

But otherwise it was a frustrating day for Kane and he was booked for a tackle on Granit Xhaka on the by-line when he seemed to have little chance of winning the ball.

For much of the last two seasons, the Belgian would have been one of the first names on the teamsheet. Now he is behind Harry Winks in the pecking order.

But Winks, who suffered an ankle injury just before the international break, was named on the bench today and Dembele made his first start since the League Cup tie against Barnsley on September 19.

His early contributions were positive as he turned out of tight areas, committed Arsenal players and moved the ball on. But the Gunners went on to comprehensively win the midfield battle and Pochettino swapped Dembele for Winks in the second half.

Given his injury problems earlier in the campaign, it was welcome in some senses to see Dembele starting.

But Winks continues to look the more dynamic player, and Spurs created a couple of chances after his introduction – a Dier header was saved and Heung-Min Son volleyed wastefully over after a flick-on from his fellow substitute Fernando Llorente.

A goal in the closing stages would have at least salvaged some pride for Spurs, but in truth Arsenal could have added to their tally too and fully merited the three points.

Spurs are repeatedly beating the top sides at home, and have scored 10 goals in total during impressive victories over Borussia Dortmund, Liverpool and reigning European champions Real Madrid at Wembley this season.

However, they continue to struggle away against their biggest rivals in the Premier League.

They have now lost at Old Trafford and the Emirates in recent weeks, and have only won one of their 17 trips to Manchester City, Manchester United, Chelsea, Arsenal and Liverpool under Pochettino.

That will need to change if they are serious about winning the title, which is already looking a stretch this season, given the form of leaders Manchester City.

The Lilywhites look rather more likely to become embroiled in a top-four fight, and Arsenal are now breathing down their necks after cutting a four-point deficit to one.