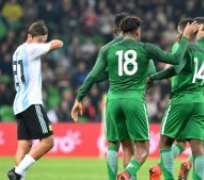 Nigeria’s Super Eagles on Tuesday night announced itself to the footballing world  of its strong intent in the coming World Cup tournament in Russia by roundly beating Argentina, who were playing without their talisman, Lionel Messi.

The scoreboard read Argentina 2 Nigeria 4 to the consternation of the football world, who would give the Nigerians no chance against one of the likely winners of the mundial.

And as expected, football enthusiasts are buzzing across social media.

after Nigeria sealed an emphatic 4-2 win over Argentina in Tuesday's friendly encounter.

Ever Banega and Sergio Aguero put La Albiceleste ahead with their strikes in the 27th and 36th minute before Kelechi Iheancho pulled one back for Gernot Rohr's men at the death of the first half.

Seven minutes after the restart of the encounter, Alex Iwobi drew both sides level followed by Brian Idowu's debut goal for the Super Eagles.

Alex Iwobi later doubled his efforts with a cool finish in the 73rd minute doing a nutmeg on Barcelona's Javier Mascherano.

And the win has left fans buzzing after the Super Eagles started their preparation for next year’s World Cup in Russia on a high.

Idowu scored on his debut after coming on for Ola Aina, while Uzoho ensured Nigeria didn't concede again after he replaced Daniel Akpeyi who conceded both goals.

Hear Rohr, “Brian is a newcomer in the team, but he's not the only one. We have three new players, and I would like to highlight our 19-year-old goalkeeper Uzoho. He played well. Such matches are specially designed so that we can asses new players in the team. We have three players who have a special relationship with Russia.

“We have Ahmed Musa and the captain (Mikl Obi) of the team. He has a connection here through the family. Brian played well, scored a goal. His prospects depend on how he will perform at the club. His debut, I'm happy. On his position we have other options, so who will pick who plays better, he will be involved in the fight.”

The Rainbow with agency reports