How are the mighty fallen? Italy misses World Cup for the first time in 60 years 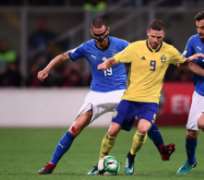 Another footballing giant has missed out on next summer's World Cup, and this time it is four-time world champions Italy.

The Azzurri drew Sweden, 0-0, on Monday in their UEFA World Cup qualifying second leg at the San Siro, but the result was good enough for the Swedes to reach Russia in 2018 after coming away with a 1-0 victory in the first leg.

Gian Piero Ventura's Italy became the first Azzurri side since 1958 to miss out of qualification into the world's most prominent competition. That tournament was ironically held in Sweden, where the hosts finished runners' up to Brazil.

Meanwhile, for Sweden, the Euro nation reaches the World Cup for the first time since 2006, after previously missing out on two successive editions of the competition (2010 & 2014).

The visitors sat back for much of the match and absorbed Italy's pressure, but the Azzurri often made the task easy for Sweden with their lack of build up.

The Italians were desperate to get a first goal before halftime, when Ciro Immobile found himself in on goal, but his shot took a slight deflection from Swedish goalkeeper Robin Olsen and was ultimately cleared before the ball could trickle over the goal line by  Andreas Granqvist.

Jorginho's inclusion in the starting XI for the suspended Marco Verratti was a big talking point heading into the match, and the Napoli midfielder nearly made a major impact in the 27th minute.

The 25-year-old played a brilliant flicked ball over the top of Sweden back line towards Ciro Immobile, but the final shot by Antonio Candreva wasn't on target.

Sweden didn't have the ideal start to the second leg, with the Blue-Yellow forced to make a substitution inside the opening 20 minutes for the injured Jakob Johansson.

Marco Parolo had a legitimate shout for a penalty kick after just eight minutes when the Italian attacker was contacted in the Swedish penalty area.

The visitors had their own claim for a penalty in the 12th minute after the ball appeared to pop up and catch the arm of Candreva, however, the referee opted to play on once again.

Italy joins Chile, Holland, the U.S. Men's National Team, Ghana and the Ivory Coast as some of the most recognizable countries to miss out on next year's World Cup.