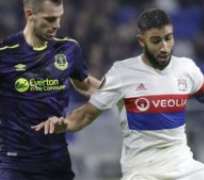 Could Alexandre Lacazette 's Lyon running mate be joining him at Arsenal?

A report from David Woods of The Daily Star says Arsenal is set to spend around $78 million to bring Nabil Fekir to the Emirates Stadium.

Fekir sprung Lacazette for three goals last season, tied with a bevy of pairings for the second-most prolific connection in Ligue 1.

The 24-year-old playmaker has 11 goals and three assists in 11 Ligue 1 matches this season, adding another goal in the Europa League. Fekir has a goal in 10 France caps.

Usually Star reports comes with not a grain but a mine of salt, but it bears an extra look when a reporter attaches his name to it.

Fekir's an extremely exciting player, and represents the ideal 'Wenger buy.' A natural fit to slide into Mesut Ozil's role, with far better finishing boots, this one would make a lot of sense for Arsenal should someone else not slide in with a better offer.