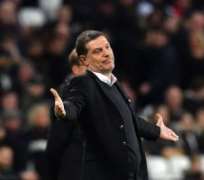 West Ham United have sacked Slaven Bilic as manager and are set to appoint David Moyes on an initial six-month contract.

The club are in the relegation zone following Saturday's 4-1 defeat by Liverpool and, barring a breakdown in negotiations, Moyes will take over. West Ham are offering him a deal until the end of the season, at which point Moyes's future would be reviewed.

West Ham said in a statement : “West Ham United can confirm that Slaven Bilic has today left his position with the Club.

“The chairmen and board of West Ham United would like to place on record their thanks and gratitude to Slaven and his team for their services over the past two and a half years, but believe a change is now necessary in order for the club to move forward positively and in line with their ambition.

“The club's search for a new manager to take West Ham United forward is underway and an announcement regarding Bilic's successor is expected to be made over the coming days.”

Moyes is out of work after finishing bottom of the Premier League with Sunderland last season. He has also managed in England's top flight with Everton and Manchester United and had an unsuccessful spell with Real Sociedad in 2014-15.

Bilic took over as West Ham manager in 2015 and finished seventh in his first campaign, then 11th last season. His team have managed only two wins from their first 11 league games this season and the heavy defeat by Liverpool followed a 3-0 reverse against Brighton in their previous home match.

West Ham's co-chairmen, David Gold and David Sullivan, said the decision to sack Bilic had been made with “heavy hearts”. They praised Bilic for his conduct and noted the win he oversaw against Manchester United in the final game at Upton Park last year but said recent results had “not been of the expected standard”.

In a statement they said: “During the summer, the board invested heavily signing the players Slaven believed would complete the squad he needed to push the club back towards the level we had reached in his first season, and we believe we have the players capable of doing that.

“We have not seen enough indication of the required improvement to give us the encouragement that things would change and we would meet our Premier League aspirations this season.

“We believe a change is now necessary to ensure we can begin to move the team back in the right direction.

“We see this as an exciting opportunity to appoint a quality manager to the position to inject fresh ideas, organisation and enthusiasm into a very talented squad.”