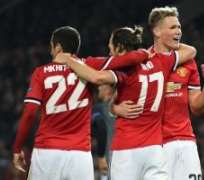 Manchester United have broken their club record after extending their unbeaten home run to 38 games. A 2-0 victory over Benfica in the Champions League took United to the milestone while putting them on the brink of qualification for the next round of the competition.

Old Trafford hot-seat in the summer of 2016, United have only lost one home game in all competitions. That defeat came against Pep Guardiola's Manchester City last September – in their 38 subsequent home games United have drawn 11 matches and won an impressive 27.

Speaking after United's most recent success, Tuesday's 2-0 win over Portuguese outfit Benfica, Mourinho said: 'I'm more than happy. 'We changed a lot of players, we broke the natural dynamic of the team and the routine. 'Also we played a kid from the academy [Scott McTominay], we scored two goals, we didn't conceded – three more points, more money for the club.'

In his first season at the Theatre of Dreams, Mourinho won the EFL Cup and Europa League to qualify for the Champions.