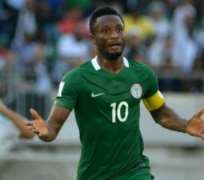 The Nigerian senior men football team visit Algeria next week in a 2018 FIFA World Cup qualifying match, and also take on Argentina in Russia four days later in a friendly.

Forwards Kelechi Iheanacho, Alex Iwobi and Odion Ighalo were also on the list, which also has three players placed on standby.

However, there is a first call-up for impressive goalkeeper Francis Uzoho of Deportivo La Coruna of Spain and midfielder Chidiebere Nwakali, a former FIFA U-17 World Cup winner.

Russia-based Brian Idowu has also been placed on standby, only for the friendly with Argentina.

2013 AFCON winner Kenneth Omeruo is on standby for both matches, alongside former junior international Alhassan Ibrahim, who now plays in Austria.

All invited players are expected to arrive in a camp in Morocco on Monday, November 6, before the delegation flies to Constantine the following Thursday.

Two days later, the Super Eagles will leave Constantine for Krasnodar, the Russian city which will host the international friendly against Argentina on November 14.