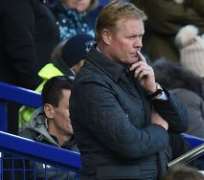 S ean Dyche has emerged as one of Everton's top targets following the sacking of Ronald Koeman as manager although David Unsworth will take charge for the short-term.

Unsworth, a former Everton defender, will step up from being Under-23s manager, along with another former player John Ebbrell, his assistant, for Wednesday's Carabao Cup tie away to Chelsea.

The pair could also take charge of next Sunday's Premier League match away to Leicester City – who are also searching for a new manager – while the club fully assesses what to do.

One outside option is to keep Unsworth in place, possibly even until the end of the season should things work out, while Everton consider possible candidates but Dyche is believed figure prominently in their thoughts at present.

The Burnley manager has also strongly been linked to the Leicester job and there is a sense that should he leave Turf Moor he would prefer to move further south to be closer to his family home which would point against Everton. If a deal is agreed it is thought Everton would have to pay Burnley £2.5million in compensation and meet Dyche's financial demands.

That would not appear to be a problem given the money paid to lure Koeman from Southampton 16 months ago but the optimism of that hiring, with a seventh place finish in the Premier League last season and a summer of spending the biggest transfer budget in Everton's history, has quickly evaporated during this disastrous campaign.

D yche is not the only candidate being mooted as a possible replacement. Bournemouth manager Eddie Howe – an Everton supporter – has long had his admirers at the club but it would also be difficult to lure him away mid-season. The same would apply to Watford manager Marco Silva. Everton also admire their former player, Mikel Arteta, who is working as Pep Guardiola's assistant at Manchester City but, again, it would be difficult to prise away and that would also appear to be a significant gamble given his inexperience.

Everton may aim for either Carlo Ancelotti or Thomas Tuchel – both currently out of work – but although they would both be interested in coming to the Premier League both would prefer a Champions League club or Arsenal should a vacancy arise there. Both appear long-shots.

Koeman was sacked following Sunday's terrible 5-2 home defeat to Arsenal which left Everton in the bottom three with just eight points from nine games and already eight points outside the Champions League places.

Hours after the defeat the 54-year-old was spotted dining at San Carlo restaurant with his wife, Bartina, in Manchester with Guardiola also in attendance. Koeman arrived at Everton's Finch Farm training ground at 7am on Monday and oversaw first-team training before then being called to a meeting with Everton chairman Bill Kenwright and chief executive Robert Elstone during which he was told he was being fired.

The Arsenal defeat was the final straw for Everton's majority shareholder Farhad Moshiri who bought shares in the club in Feb 2016 and has now overseen the departure of two managers, having also sacked Roberto Martinez.

Unsworth took charge of the senior side for a match after that decision, at the end of the 2015-16 season, and is expected to fulfil the same role again, possibly for longer this time.

Moshiri had given Koeman his backing just a fortnight ago after their 1-0 home defeat by Dyche's Burnley, but since then Everton have drawn at Brigton, lost to Lyon in what has been a desperately poor Europa League campaign, before the humiliation against Arsenal.

I t will not have helped Koeman's prospects that Arsenal was the club Moshiri attempted to buy, along with Alisher Usmanov, before he invested in Everton. Koeman therefore also becomes the third

“Write what you want to write,” Koeman said as he departed his post-Arsenal press conference and they were his final public words as Everton manager having arrived at the club with Moshiri proclaiming him the kind of big-name needed to compete against the other “Hollywood” managers in the north-west such as Guardiola, Jose Mourinho and Jurgen Klopp.

Koeman – along with his brother, Erwin – arrived speaking of “an exciting project”, of “financial possibilities” and of “fighting for trophies” and Everton appeared to be set to be challengers after last season and the promise of spending heavily – which they did.

However their recruitment has been poor and badly-planned with Gylfi Sigurdsson failing to justify the £45million spent on him, for example, and the negligence of not replacing striker Romelu Lukaku after he was sold to Manchester United for a fee of up to £90million appearing worse by the day.

Questions are also being asked over how much responsibility should be shoulder by Everton's director of football Steve Walsh with the sense that either he or Koeman would eventually have to go.

Koeman also made it clear that Ross Barkley could leave and it will be interesting to see whether there is a way back now for the midfielder, injured at present, with Tottenham Hotspur still hoping to sign him in the January window.

On Monday lunchtime Everton issued a statement confirming Koeman's departure which read: “Everton Football Club can confirm that Ronald Koeman has left the club. Chairman Bill Kenwright, the Board of Directors and Major Shareholder Farhad Moshiri would all like to express their gratitude to Ronald for the service he has given to the Club over the past 16 months and for guiding the Club to seventh place in last season's Premier League campaign.”