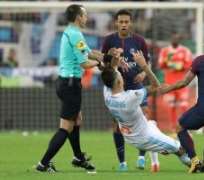 Neymar was both hero and villain as the Brazil superstar scored and was then sent off as Paris Saint Germain snatched a last-gasp 2-2 draw in a fiery clash with bitter rivals Marseille in Ligue 1 on Sunday at Velodrome Stadium.

Marseille opened the scoring with a Luiz Gustavo long range shot on 16 minutes before Neymar levelled with a fine threaded shot on 33 minutes for his 10th goal in 11 games for the club.

After Florian Thauvin fired Marseille ahead late on, Neymar was booked and then red-carded in the space of two minutes when appearing to headbutt Marseille's Argentine striker Lucas Ocampos.

In another dramatic twist, a bullet-like free-kick from Edinson Cavani made it 2-2 in time added on to salvage a point for PSG as Marseille players slumped to the Stade Velodrome pitch in disgust and frustration.

“We are a little disappointed with the red card for Neymar because he was the victim of lots of fouls throughout the match,” said PSG coach Unai Emery.

“I believe that it's the job of everyone to protect the great players.”

The result means PSG keep their unbeaten record atop Ligue 1 with 26 points, four ahead of Monaco on 22. Marseille are fifth on 18.

“It was an important goal given how this match went,” said the Uruguayan striker Cavani.

“It was very difficult for us to play in this atmosphere and it's an important point. That's football — there are matches where you have to give everything.”

Ambitious Marseille, bought last year by American businessman Frank McCourt, are targeting a return to the Champions League and would likely have settled for a point ahead of the kick-off.

The atmosphere was red hot with supporters fighting running battles with police outside the ground with even cars bearing Paris number plates being attacked.

There were 13 arrests at a game from which PSG fans were banned over security fears.

Inside, Neymar was constantly pelted with coins and lighters when he took corners and needed police protection with raised shields when he went close to the sidelines.

After a series of heavy tackles the Brazilian, the world's most expensive footballer, picked up his first yellow for standing on the hand of Morgan Sanson, who had just fouled him.

Two minutes later Neymar suffered a further series of challenges and eventually lost his cool by appearing to aim a headbutt at Ocampos.

The Argentine fell to the floor and remained there before Neymar smiled broadly and turned away without protest as the referee waved his red card.

PSG's other key striker Kylian Mbappe had an evening to forget as he was marked and tackled out of the match and was even booked when appealing for a penalty.