Antonio Conte faces crisis as Chelsea stars turn against him 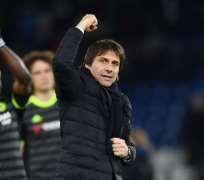 Chelsea players are turning on Antonio Conte due to his intense training schedule and believe he is at fault for harming their title defence and for players picking up injuries this season, reports claim.

The Blues boss enjoyed a fine debut season in English football, guiding Chelsea to the Premier League title but his second campaign has been disappointing thus far.

Chelsea have lost their past two Premier League matches and are already nine points adrift of leaders Manchester City, having suffered defeats to Pep Guardiola's side and bottom side Crystal Palace.

A late Eden Hazard header against Roma saw Chelsea narrowly avoid three straight defeats but injuries to David Luiz and Tiemoue Bakayoko only added to the sense of crisis.

Kante is out injured (Picture: AMA/Getty)
Luiz was withdrawn against Roma (Picture: PA)
With N'Golo Kante and Victor Moses already out for several weeks and Alvaro Morata only just returning, the injury problems just keep mounting for the Italian.

And Chelsea stars are begging him to tweak his training schedule in order to allow them more rest to avoid injury, according to the Times.