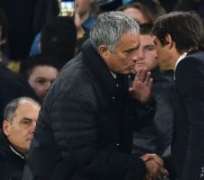 Chelsea manager Antonio Conte says Manchester United boss Jose Mourinho needs to “look at himself” and stop talking about his former side.

Conte has bemoaned Chelsea’s injuries this season and said after a 3-3 draw with Roma in the Champions League his side were in an “emergency situation”.

Mourinho, who had two spells as Chelsea boss, said there are other managers who “cry and cry and cry” about injuries.

“A lot of time Mourinho has to see what happens at Chelsea,” Conte said.

Asked about Mourinho’s comments, which were not specifically directed at Conte, the Italian added: “A lot of time, also last season, I think he has to think about his team and stop, to look at himself, not the others.”

Both David Luiz, who started in midfield, and Tiemoue Bakayoko picked up injuries as the Blues drew at home to Roma in the Champions League, while Manchester United won 1-0 at Benfica .

“The same players have been going all the time since pre-season,” Conte said. “It’s not about injuries, but trying to get the best out of the team.

“We’ve got three injuries, not seven or eight, but it’s still an emergency situation for us.”

Chelsea spent nearly £180m in the summer, adding to their midfield options with the signing of Drinkwater from Leicester and Bakayoko from Monaco.