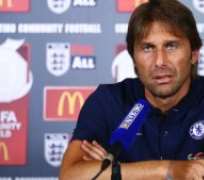 ntonio Conte has called up four youngsters to train with Chelsea ‘s first team ahead of the Champions League clash with Roma on Wednesday.

The Blues are recovering from their 2-1 defeat to Crystal Palace and contending with injuries to N’Golo Kante and Alvaro Morata , though the Spaniard rejoined the group on Tuesday.

Prospects Ethan Ampadu, Dujon Sterling, Jake Clarke-Salter and Kyle Scott all joined in with the senior players as Conte looks to put up a perfect nine points from three games.

Ampadu, 17, is a defensive midfielder who made his first-team debut in the Carabao Cup vs Nottingham Forest and has already been called up by Chris Coleman for Wales. Scott made the bench for the Blues at the weekend (Image: Action Images via Reuters)

Ampadu has already been called up to the senior Welsh national team (Image: Action Images via Reuters)

Scott, 19, was on the bench at Selhurst Park at the weekend and seems to be the first option for Conte should he require a centre-midfielder in the absence of Kante and Danny Drinkwater.

Sterling, 17, is a right-back or winger with pace, power and a deadly delivery, while the 20-year-old Clarke-Salter is one of the Blues’ most highly-rated centre-backs and impressed on loan at Bristol Rovers last term.

The Blues were handed a big boost after Morata returned to training with the Spanish striker sidelined since picking up a hamstring problem in the home defeat to Manchester City last month.