Aguero injured in car crash, to be out for up to 6 weeks 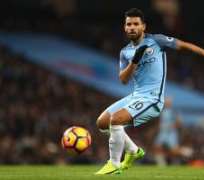 Manchester City striker Sergio Aguero has reportedly suffered injured ribs after the Argentine forward was involved in a car crash in Amsterdam, media in Argentina reported on Friday.

Argentine newspaper Diário Olé said Aguero, who was in the Netherlands to attend a concert, was riding in a taxi when the vehicle crashed into a pole.

Aguero, 29, was a passenger in a taxi en route to the airport in Amsterdam after attending a concert on Thursday night put on by Maluma, a Colombian singer, when the driver lost control of the vehicle and hit a column on the side of the road, according to ESPNFC.

“Sergio Aguero will be assessed by Club doctors today after being involved in a road accident on Thursday,” City said of the Argentina striker in a statement on their website. (www.mancity.com)

“The City forward was in Holland on his day off and has sustained injuries. He will return to Manchester this morning and his status will be checked ahead of tomorrow’s Premier League clash at Chelsea.”,

Earlier his former club Independiente, said on Twitter: “Strength and fast recovery. All Independiente is with you at this difficult time.”

Aguero could miss six to eight weeks because of the injury, which would initially rule him out for Saturday’s Premier League clash with Chelsea and a crucial pair of World Cup qualifiers for Argentina next week.