I want AWOL Diego Costa back at Chelsea: Eden Hazard 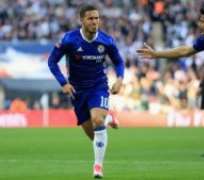 Costa is currently AWOL after Antonio Conte made it clear the Spain international was not in his plans this season, with the transfer deadline passing and the forward still on the books at Chelsea.

While the Brazil-born front man has not been included in Chelsea’s Champions League squad, he is in their 25-man Premier League selection.

That has led to suggestions that Costa could be brought back into the fold, a move that Hazard would welcome – although he acknowledges that he cannot affect his team-mate’s situation.

“Diego? We spent three years together and we won everything – not the Champions League but we won the league,” Hazard said at a Nike launch. “It was a pleasure to play with him.

“I want him back but you know I don’t make the decision. But he is a top guy, a top player.

“I hope for him in the future he can find a solution and I want to see him on the pitch soon.”

Despite Costa’s absence – and an opening-day defeat to Burnley – Hazard is confident that Chelsea can challenge for honours this season.

“We want to win something big with Chelsea and that is always what we want in the start of the season,” he added.

“It is never easy and this year is no different, but we have great players and we have a great manager. So we are ready for the season.”