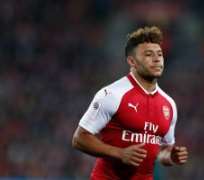 Liverpool are holding out hope of pulling off a blockbuster triple swoop on transfer deadline day.

Alex Oxlade-Chamberlain is set to sign from Arsenal after the Reds agreed a £40 million fee for the England international.

SkySports report Oxlade-Chamberlain is undergoing a medical at the FA’s St George’s Park in Burton as he is currently on duty with the Three Lions.

He could be Liverpool’s only deadline day addition, but they still aim to add two more if they can.

The Independent report Liverpool are still aiming to sign Thomas Lemar from AS Monaco and Virgil van Dijk from Southampton.

Lemar is considered as a priority as they seek to bulk up on attacking players. Van Dijk has been linked all summer long and the defender has handed in a transfer request. Southampton have long maintained they do not wish to sell.

The Express report Liverpool are ‘optimistic’ they can get a deal done for the Dutchman before the transfer deadline.

Van Dijk would become an automatic starter at Liverpool if they can pull off a move. Getting Oxlade-Chamberlain done is a positive for the Reds, but the real excitement will begin if either Lemar or Van Dijk sign too.

Get all three and there could be wild celebrations on the red half of Merseyside.