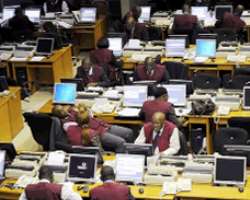 Operators in the Nigerian Capital Market have developed cold feet, following the resolution by Securities and Exchange Commission (SEC) to increase surveillance on the activities in the market.

SEC had observed that malpractices in the market stem from none compliance to the rules guiding operations in the market. This, according to a source close to the Commission, has forced the apex capital market regulator to review the rules and inject more stringent items that would compel operators to comply with rules guiding the market.

The commission has raised the bar to strengthen its monitoring capacity, in order to address issues arising from various market infractions in the market. The Director General of the SEC, Ms Arunma Oteh, has said that the commission would do anything to compel operators in the market to obey the rules guiding it. This, according to her, informed the decision to tighten the noose on market infractions and other miscellaneous capital market crimes.

The high point of the new rule is the provision that allows the commission to approve the appointment of executive directors of market operators. This, she said, was to ensure that only 'fit and proper persons run the affairs of market institutions.' Another new rule on the validity of accounts submitted to the commission required that it should not be more that nine months for corporate bodies and not more than 12 months for government and supranational bodies.

One of the new rules also stated that henceforth, underwriting of issues in the market was no longer mandatory, adding, however, that where an issue was underwritten, the underwriting commitment by a single underwriter would not be more than three times its shareholders fund for equity offering and not more than four times for fixed income securities.

The commission also made a new rule for listing of shares after allotment saying, 'Issuers are now required to list their securities not more than 30 days after allotment.' New rules were also made for the regulation of corporate bonds and money market funds.

In furtherance of the anti- competition powers of the commission under Section 128 of the ISA, which empowers it to order a break-up of a company where its business practices are capable of restraining competition or creating a monopoly, the commission issued a new rule providing details of those practices that would cause a restraint on competition.

According to her, SEC in 2009 focused its priorities on monitoring and enforcing safer, transparent and efficient capital market as it adopts zero tolerance on market infractions. She said that the Commission will intensify such efforts to improve on the market regulation efficiency and the supervision of the laws and rules, noting that the commission suspended over 77 operators in the last 20 months and ready to revoke licences of many who fails to repent from various market infractions noticed in the market.

Oteh said that the commission will not hesitate to increase the number should operators fail to adhere to the laid down rules guiding the market. She warned that stiffer penalties await violators as the commission believes that the proposed rules would bolster confidence and bring the quarterly reporting information up to international standards. 'Another rule which had been exposed to the public and presently awaiting ministerial approval is one which expects the auditor of a public company to express opinion on the existence, adequacy and effectiveness or otherwise of the internal control system.

This is informed by the fact that strong internal controls are important in promoting good governance and that the auditor should be in a position to assess the quality of internal controls and express opinion on his observation,' she said.

According to her, new rules on corporate bond issuance were approved while book building issuance system was introduced and now popularly used. She concluded that the Commission has also finalized arrangements with IFC for Resident Adviser on Bond Issues.