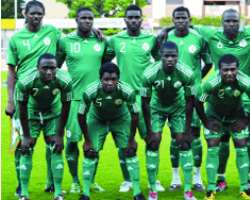 Nigeria and North Korea will clash in a World Cup warm-up match at the Makhulong Stadium, Tembisa, on the outskirts of Johannesburg following the approval of the world football governing body, FIFA.

Nigeria's Coach, Lars Lagerback, has said he believed a game against the fast North Koreans would prepare his team ahead of the potentially decisive 2010 FIFA World Cup tie against South Korea at the Moses Mabhida Stadium in Durban on June 22.

Nigeria, who flies direct from London to Durban aboard a chartered flight on Monday, will arrive in Johannesburg on the morning of Tuesday, and return to their base camp in Richard's Bay the following day.

They will return to Johannesburg again on the morning of June 11 for the cracker against Argentina in the opening match of Group B, at Ellis Park Stadium on June 12.