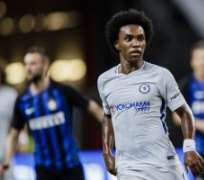 The Brazil international was named Chelsea Player of the Year in the 2015-16 season but struggled at first to fit in under incumbent chief Antonio Conte. However, that didn’t stop the west Londoners rejecting United’s approach for their player, Willian told Goal’s Gabriel Pazini :

“There were a few conversations with my agent. I worked with Mourinho and I became his friend as well.

“He likes me a lot and I like him a lot as a coach and as a person. He has put his trust in me and in my work, and I was very grateful to him.

“Manchester came to me, they talked with my agent, but nothing happened, because Chelsea would not negotiate me in any way and I’m very happy at Chelsea.”

Willian ultimately signed a new four-year contract at Stamford Bridge in July 2016, although his struggles under Conte continued as he made 15 Premier League starts last term and played the full 90 minutes on just two occasions.

That lack of prominence is merely thanks to the competition for a place on the Chelsea wings, and first-team stars like Eden Hazard and Pedro ensure Willian isn’t able to take his spot for granted.

That being said, the South American has had his fair share of highlights in England and would undoubtedly be welcomed to United by Mourinho should he become available. Willian turned 29 on Wednesday, and his club celebrated his best goal in their colours, as voted for by the fans:

Willian started in Sunday’s FA Community Shield defeat to Arsenal on penalties, although it’s difficult to ascertain what that poses for his season ahead considering Hazard is sidelined with an ankle injury.

While United failed with an approach for the player last summer, the Red Devils may have another chance should Willian’s expectations fail to be met during his second season under Conte, which begins against Burnley on Saturday.

Should Mourinho still require a familiar face possessing the kind of speed with which he usually likes to operate down his wings, Willian could yet reunite with his friend at Carrington.