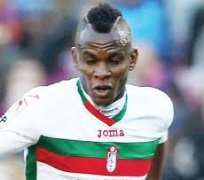 Super Eagles midfielder, Uche Agbo has not given up on playing in the Premier League despite joining Belgian side Standard Liege on a three-year deal from Watford. Agbo Agbo joined Udinese in 2013 but spent the last three seasons on loan at Granada in Spain, prior to joining Watford on a five-year deal last year.

“I'm very happy to join an ambitious club in Belgium, but when my time is right playing in the Premier League will come,” Agbo told BBC Sport.

“My focus right now is to settle at Standard Liege and give my all, by the power of God I will be there [in England] very soon. “There is no disappointment or whatsoever, sometimes God takes us on a different road to get to our desired destination.” The 21-year-old played 53 times for Granada's B team, before breaking into their first team in 2016 and he made 31 appearances in Spain's La Liga last season.,