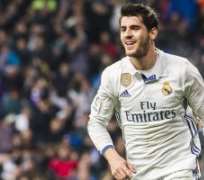 Real Madrid and Chelsea have agreed a fee for Morata , who was also a target for United during the close-season.

Both Premier League clubs were also believed to be chasing Lukaku, with United signing the striker for a reported £75million from Everton .

Speaking on Wednesday, Mourinho said he had little interest in his former club’s movements as he challenged Lukaku to prove his worth at the top level, including the Champions League.

“I’m not interested in what Chelsea Football Club does, really,” he told a news conference.

“We needed a striker. With Zlatan [Ibrahimovic] in his best condition we needed one to give cover, to give options, him and Marcus [Rashford] was not enough, especially after Zlatan’s injury.

“We got a big player, a player that I can compare with what he was a few years ago because he worked with me a few months like four or five years ago. His development was very, very good.

Morata the perfect fit for Chelsea
“I think with Chelsea it was obvious they were going to sign a striker especially after the situation with the manager [Antonio Conte] and Diego [Costa].

“It was clear they were going to sign a striker, they did it with Alvaro and Alvaro is a very good player for them.”