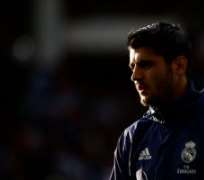 If Chelsea want to complete a double deal for Real Madrid duo Alvaro Morata and Danilo they will need to stump up a massive €100 million (£88.8m), according to reports in Spain.

The Blues are in dire need of a new striker after Antonio Conte told Diego Costa he no longer featured in his first-team plans, but they were gazumped for first-choice replacement Romelu Lukaku by Chelsea.

That has led Chelsea to hurriedly look for alternatives, with Morata chief among them, while Conte is also eager to sign a recognised right-sided defender having used Victor Moses in an unfamiliar wing-back role last season.

Chelsea expected to sign Lukaku until Jose Mourinho swooped in and stole him (Picture: Getty)

Danilo is top of their wish list, though they will have to stump up a big fee to land both the Brazilian full-back and Morata this summer.

Spanish publication Marca report that Real are finally ready to sell both players, despite Zinedine Zidane initially having been keen to keep them at the club.

Danilo and Morata have found themselves on the fringes of the Real starting XI (Picture: Getty)

They are now preparing to sell the duo in the coming weeks or even the coming days, and expect to net €100m from the deal – €70m for Morata and €30m for Danilo.

Morata has no chance of being a regular starter while Real have Cristiano Ronaldo, Gareth Bale and Karim Benzema in their famous BBC attack, while Dani Carvajal has locked down the right-back spot.

Alvaro Morata's La Liga season
Total appearances26Goals15Starts14Assists4
There is one problem for Chelsea, however: they are not the only clubs interested in the pair.

AC Milan have made a play for Morata as they look to continue their summer spending spree and could get into a bidding war that bumps up the Spanish striker's price.

Meanwhile, after missing out on Dani Alves, Manchester City have shown an interest in signing Danilo as Pep Guardiola looks to recruit cover and competition for new recruit Kyle Walker.