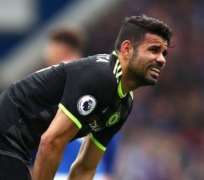 With Romelu Lukaku almost certainly headed to Manchester United , Chelsea has been left to reconsider the future of striker Diego Costa .

Chelsea had been reportedly chasing their former Belgian striker for months, but with Manchester United unable to secure a deal for preferred option Alvaro Morata, Manchester United switched gears and pounced on the chance to swipe Lukaku from under the Blues' noses.

Lukaku's escape means the options are dwindling for Chelsea up front. Real Madrid president Florentino Perez is reportedly asking upwards of $100 million for Morata. Torino wants the same for Andrea Belotti, not budging from his $115 million release clause. Antoine Griezmann is off the table. So is Alexandre Lacazette.

With all the top-level strikers either spoken for or potentially too expensive, the Blues must now rethink their plan to let Diego Costa leave. The man himself said that Antonio Conte had already texted him a month ago with news that he was suddenly surplus to requirements at Stamford Bridge, but now Chelsea expects him to report to training on Monday with the rest of the team.

According to an ESPN report , Atletico Madrid is the only current suitor for Costa, and that would require the Spaniard to sit out six months before the club can register him in the winter. Even then, the 28-year-old would have to battle with Griezmann for playing time.

Another option the ESPN report mentions Swansea striker Fernando Llorente as an option, but at 32 years old, the Spaniard makes an uninspiring choice despite scoring 15 goals last season.

Reports in the English tabloids are saying that Costa's agent Jorge Mendes has asked to meet with Conte and other Chelsea front office members in hopes of reconciling things before next season. Costa reportedly turned down a contract offer at the end of last season, and hopes for a raise. However, he also knows that playing time is a must with the World Cup just around the corner.