Bravo heroics as Chile edge out Portugal on penalties 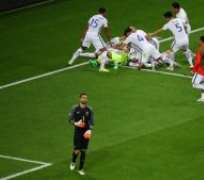 Ronaldo, who usually goes last in the shootout, did not get to take a kick.

Arturo Vidal, Charles Aranguiz and Alexis Sanchez all scored for Chile in the shootout on Wednesday.

Neither team managed to score in normal and extra time.

Chile and Portugal both came close in the first 10 minutes but there were few chances after that in a lackluster game between two of the main title favorites.

Ronaldo was off-form for Portugal and Chile gradually took control in front of 40,855 fans at Kazan Arena, most of them behind Chile.

Chile will play Germany or Mexico in Sunday’s final in St. Petersburg. It will be seeking its first title outside of South America after winning the Copa America in 2015 and 2016, both times in penalty kick shootouts.

“I was injured and I didn’t play at my normal pace, but I normally get things quietly,” Bravo said.

“This is very important to us because it’s like completing a very successful cycle. We are very happy to be able to play in the final.”

Portugal was looking for its second consecutive title after winning the European Championship last year.

“Claudio was amazing, the players who scored their penalties were amazing and I think we deserve to be in the final,” Chile coach Juan Antonio Pizzi said. “We have made a huge effort and I think you could see it during the game.”