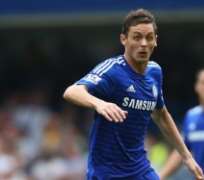 Manchester United has agreed on a deal to sign Chelsea’s Nemanja Matic for £40 million (about $50 million), and the signing will be announced in the next week, according to reports.

Jose Mourinho , the United boss, has been an admirer of Matic since the pair won the Premier League title at Stamford Bridge in 2015.

According to The Guardian , the 28-year-old midfielder made an agreement with Manchester United after the two clubs agreed upon the fee.

Matic, the report says, will earn around £155,000 (around $198,000) a week and will take his medical at the Carrington Training Centre this week. Mourinho is currently in Portugal for the funeral of his father, who died on Sunday.

Though the manager's departure may slow the deal down, United is expected to confirm Matic's arrival before the team travels to the United States on July 9 for a preseason tour.

Matic was signed by Mourinho at Chelsea for £21 million from Benfica. It is believed that Mourinho sees the Serbian midfielder as the eventual replacement for Michael Carrick in the center for United.

Mourinho is keen to have more signings in place before the squad goes on its summer tour. According to the Daily Mail , United will also confirm the signing of Ivan Perisic for £44 million (about $56 million) from Inter Milan in the coming weeks.

But Mourinho has reportedly told United chairman Ed Woodward that he wants to see Perisic in a United shirt before July 9, so he can be part of the squad during its tour of the States.

With Victor Lindelof , the Swedish center back, confirmed, Matic virtually complete and Perisic on the way, Mourinho's transfer wish list will contain just a striker. Alvaro Morata, of Real Madrid, who is believed to be United’s main target, is valued at £70 million.