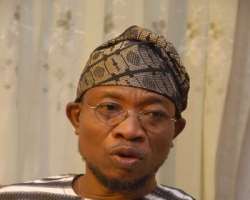 
LAGOS, May 28, (THEWILL) - Five hours after Osun State Elections Petitions Tribunal dismissed a petition he filed against the election of Governor Olagunsoye Oyinlola, the Action Congress (AC) governorship candidate in the, Engr. Rauf Aregbesola today said he would appeal the decision of the tribunal, which he described as a travesty of justice.

Aregbesola expressed strong misgivings at the tribunal’s decision while addressing a news conference in Lagos this evening along with his deputy, Mrs. Grace Laoye-Tomori among others, saying he was shocked at the decision despite a number of proven facts and evidence made available to the tribunal.

In an address he titled: "The Just Shall Live by Faith", Aregbesola added that he was sure the Court of Appeal would do justice to his petition considering 14 cases of irregularities and frauds, which he said characterised the 2007 governorship election in all local governments in Osun State.

He confessed that he was no doubt amazed at the tribunal’s decision, though "not repressed and disturbed. We were shocked no doubt, but not repressed. We will fight on until we get justice. I represent a force that is indestructible. So, I am not worried; neither am I perturbed about the decision of the election tribunal."

Giving more insight in the oral and documentary evidence presented at the tribunal, Aregbesola said 14 different cases of irregularities and frauds characterised the 2007 gubernatorial election in Osun State, all of which he said were presented, tendered and proven, yet the petition was dismissed despite its merit, saying a plethora of evidence of irregularities affected 879 polling units out of a total of 946 polling units in the 10 disputed local governments.

He also cited the case of Boripe Local government where a total number of 12,000 people were registered, but the Independent National Electoral Commission (INEC) certified register apparently showed that 14,000 voters.

Aregbesola named one Alhaji S.O. Nafiu, who he described as an agent of the People Democratic Party (PDP), signed results sheets for 9 out 11 wards in Ife Central Local Government revealed in the Forms EC8B, which were produced by INEC for inspection and certified by it for the local government.

Citing another case, Aregbesola explained that no form EC8A, which is the primary result sheet in all elections, "was available in 114 polling units across 7 local government council and yet results were supposedly collated and votes allotted to the said polling units on the forms EC8B, EC8C and EC8D.

"In Odo Otin Local Government, INEC certified and supplied, as exhibit, 86 blank forms EC8A and yet results were supposedly collated and allotted to the said polling units on forms EC8B, EC8C and EC8D. Suffice to say that this is the local government area of Olagunsoye Oyinlola, who is the first respondent.

"Ballot papers, supplied by INEC as used, were more than the total numbers of ballot papers recorded on form EC8A as having been used for the respective polling units, affecting 116 polling units across nine of disputed local government areas. This leaves an excess of 10,561 ballots in the said 116 polling units.

"In 201 polling units in 8 of the disputed local government council, the total number of votes recorded on forms EC8A was more than the number of persons accredited to have voted on the voters register produced for inspection, certified by INEC and tendered as exhibits," Aregbesola explained.

The governorship candidate said the total number of votes recorded on form EC8A for 368 polling units in 8 of the disputed local government councils was less than the number of persons accredited to have voted on the voters register produced for inspection, certified by INEC and tendered as exhibit.

In his words: "In 71 polling units of 8 of the disputed local government councils in the state, the total number of votes recorded on form EC8A was more than the number of registered voters, in the voters register produced for inspection, duly certified by INEC and tendered as exhibits.