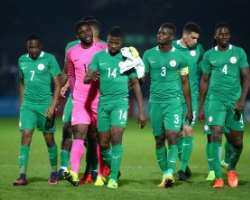 The Nigerian Super Eagles were on Saturday evening shocked by the visiting South Africa in an African Nations Cup qualifier played at Godswill Akpabio Stadium in Uyo, capital of Akwa Ibom State.

The South Africa’s Bafana Bafana put two through Nigeria’s net with the Nigerian lads failing to register any goal, achieving a feat which had eluded the boys from Mandela’s country since they achieved independence in 1991.

Despite late rally by the Eagles to redeem their image, the scoreline remained 2-0 advantage the visitors.

Nigeria paraded a very young team which were fleet-flooted but lacked the experience to handle the tactically set up South African team.

The Super eagles who had been camping for more than two weeks put a very disappointing game, lacking proper coordiantion in the defence and sharpness at attack.

Daniel Akpaeyi was in goal and he was less than convincing through out the duration.