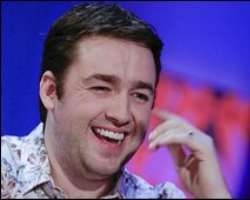 Comedian Jason Manford will replace Adrian Chiles on The One Show, the BBC has announced.

The 29-year-old will join the flagship BBC One show in July, where he will co-host with Christine Bleakley every Monday to Thursday.

The star said he was “thrilled” to become part of the team.

Last month Chiles announced he was leaving the BBC. Radio 2 breakfast presenter Chris Evans will co-host the show on Fridays.

Chiles has moved to ITV and GMTV in a new four-year deal.

The One Show editor Sandy Smith explained why Manford was chosen for the sought-after TV job.

“Jason's strength is his likeability, his natural warmth and his quick wit.

“He's intelligent and curious about the sort of subjects discussed every day on The One Show and is equally at home with the light-hearted and serious issues.”

The One Show, which began broadcasting five nights a week in 2007, offers audiences a mix of current affair items and celebrity guests.