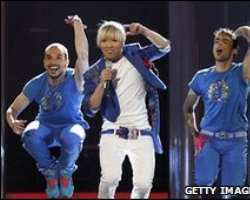 Ten countries have made it through to Saturday's grand final of the Eurovision Song Contest.

A further 10 finalists will be chosen from 17 countries in a second semi-final on Thursday night.

Belgium have made their first final since 2004 with Me and My Guitar, a ballad performed by Tom Dice.

Russia, who won in 2008, returned to the grand final with a maudlin song which some pundits had not expected to qualify.

UK viewers will be able to vote in Thursday's semi-final which will be broadcast live n BBC Three.

This year, for the first time, expert juries determine 50% of the vote in the qualifying rounds.

The judging panels are made up of record industry experts from each country.

UK entrant Josh Dubovie, 19, from Basildon in Essex, is representing the UK this year with That Sounds Good To Me, a song written and produced by Pete Waterman and Mike Stock.