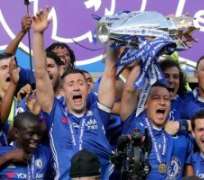 The big guns blew away the rest on the final day of the Premier League season — City thrashing Watford 5-0 and Liverpool beating relegated Middlesbrough 3-0 — to leave the top six places exactly as they had been at the start of play.

That meant Arsenal failed to qualify for Champions League football for the first time since Wenger became manager in 1996.

Despite beating Everton 3-1 with only 10 men — defender Laurent Koscielny was sent off and will miss the FA Cup final against champions Chelsea Saturday — Wenger's team was left stranded in fifth position as Manchester City and Liverpool finished in the top four behind Chelsea and Tottenham Hotspur.

Latest media reports have indicated that Wenger will sign a new contract whatever the result at Wembley Stadium, in the face of disillusionment with his stewardship by many Arsenal fans.

“We were playing in a hostile environment,” the Frenchman told reporters of his side's difficult mid-season period.

“The players came back stronger in the last two months and I'm very proud of them for doing that.

“One thing you cannot question is my love for this club. I've turned down every club in the world to stay here.”

On a day full of goals — 37 in the 10 matches — Tottenham led the way with a 7-1 thumping of hosts Hull City four days after winning 6-1 away to dethroned champions Leicester City.

England striker Harry Kane scored his second hat trick of the week to finish as the clear winner of the Golden Boot with 29 goals from only 30 games.

The win kept the Manchester side two points ahead of Liverpool, whose comfortable success at home to Middlesbrough earned them a place in the Champions League playoff round.

Disappointed Arsenal could point out that their total of 75 points was more than they achieved in finishing runner-up last season and would normally have put them in the top four.

It emphasized how the top clubs have pulled away from the rest, with a gap of 15 points between Everton in seventh place and Southampton in eighth. There was a similar gap between fourth-placed Liverpool and its Merseyside rival.

Chelsea's 93 points was the second highest total since the Premier League began in 1992 and it became the first Premier League team to register 30 victories in one season. It finished seven points ahead of second-placed Spurs.

Antonio Conte's side was presented with the trophy after beating bottom club Sunderland 5-1 at Stamford Bridge, where departing club captain John Terry made an emotional farewell speech to the crowd.

“Today is one of the most difficult days of my life,” he said.

The struggles of old rivals Arsenal and United this season meant it was the first time both sides had finished outside the first four places in the top flight since the 1978-79 campaign.

Leicester City failed to secure the win they needed at home to Bournemouth for a place in the top half of the table, the 1-1 draw ending their poor defense of the title in 12th position. — Reuters