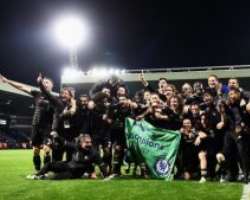 Chelsea 's players were lying in wait for Manager Antonio Conte when he returned to the dressing room on Friday. He had been celebrating with them in front of jubilant fans who had traveled to the Hawthorns, bouncing, dancing, allowing himself to be thrown into the air, but he had to be drawn away, even as the party started to get into full swing.

There were television interviews to be done after a 1-0 road victory over West Bromwich Albion, a hundred congratulations to receive after winning the championship in his first season in England. He smiled throughout, even as he nursed a fat lip, delivered by an unknown assailant in the midst of the euphoria.

When he finally made it inside, his players had a welcome prepared. They soaked him with Champagne, with beer, with water, whatever came to hand. Conte's trademark black suit, he said, was “a disaster.” He had to travel home in a tracksuit. He did not seem upset. He had known it was coming. They had quite some time to plan for this moment, after all.

This was the most fitting way imaginable for Chelsea to reclaim its crown: a game, and a deciding goal, that summed up the 2016-17 Premier League season.

Tony Pulis, the West Brom manager, described the match as a “proper Premier League” occasion. Indeed so. There was a lot of running around, a good few thundering tackles, and many of the players were above average in height. It would be a stretch to say it was beautiful.

The goal, too, was not exactly a classic — Michy Batshuayi bundling a shot past Ben Foster, the West Brom goalkeeper, after the ball had ricocheted around the box for several hours — but it was indicative.

Batshuayi, a much-coveted Belgian striker, cost Chelsea 33 million pounds ($42.5 million) last summer. He had not started in a Premier League game this season. He had played just 127 minutes. This was only his third shot on goal all season. Only in England could such an expensive resource be put to such occasional use.

The timing was telling, too. Chelsea waited until the 82nd minute — just long enough to shred the nerves — to score the goal that put it beyond the reach of its last remaining rival, Tottenham Hotspur. West Brom had been sufficiently doughty to sow just the smallest seed of doubt — perhaps Chelsea would have to wait until a visit from Watford to seal the title, or perhaps there would be a late twist in the drama.

But this title race had never really been a drama, merely the simulacrum of one. It is in everyone's interests, of course, to indulge the fantasy, but it had been just that. The sense that there was some jeopardy, that it was not all determined, was nothing more than an exercise in false consciousness, faintly unconvincing collective delusion. Chelsea did not win the league at the Hawthorns. It won it long ago.

Just when depends, to an extent, on whom you ask. Gary Cahill, the club captain, felt it was as late as last week, when West Ham United beat Tottenham, derailing its late surge.

“There were a few more smiles in training after that,” he said.

Conte pointed a little further back in time, to the way his players had responded to their surprisingly limp loss to Manchester United in April.

“We had three games in a week after that,” he said. “Against Spurs, against Southampton and against Everton.”

When Chelsea won them all, he knew there would be no stumble.

But Chelsea's Eden Hazard pinpointed a different moment. After successive losses to Liverpool and Arsenal early in Conte's reign, Chelsea strung together a team-record sequence of victories, winning 13 league games in a row before losing at Spurs in January. The players, he said, knew then that they would be champions.

“We made an unbelievable run,” Hazard said. “We said then, together, that we could win.”

History may well decree that Hazard's assessment is correct. Once Chelsea lurched ahead, during those autumn months when Conte's team rumbled relentlessly on, it simply burned all of its rivals away. Only Spurs hung on, gasping for air, in the slipstream.

It is one of soccer's most enduring myths that league titles are decided in head-to-head meetings between the elite teams. This, too, has the air of a marketing ploy: Those games are sold as winner-takes-all showdowns, seismic clashes that will make the very earth shake. You simply have to tune in.

The reality is a little more humdrum, a little less box office. Liverpool would be champion, and handily, if it were a matter of overcoming direct rivals. That Chelsea is instead, and handily, indicates the truth — that the team that comes out on top is the one that is most efficient at dispatching the rank and file.

That is what made this the most fitting conclusion Chelsea could have imagined. Conte's success this season — his remarkable, admirable success, so adamant in its exceptionalism — has been built on beating all of the Premier League's many West Broms.

Pulis's team — and this is not, especially, a criticism — is the challenge of English soccer made flesh: tough tackling and hard running and above-average height. Any team hoping to be the champion must beat West Brom, and all of the dozen or so teams just like it.

Chelsea, alone, always found a way. The lack of European competition helped, of course, and Conte has been fortunate that he has not been too badly hamstrung by injury, but it would be unfair to suggest mere fortune, and an easier schedule, is what delivered the title.

Each of Europe's elite leagues offers its own unique challenge. Chelsea is champion because it met England's far better than anyone else. That is why there was Champagne in the dressing room. It is why, as Conte addressed the news media, David Luiz and Diego Costa appeared, from nowhere, to drag him away. Chelsea has been waiting for months to celebrate. Now, it wants to get on with it.