LATIN AMERICA AND AFRICA: THE NEED FOR CLOSER COOPERATION 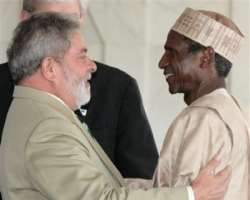 Almost every country in the world has one or two segments of its population with traces of African ancestry. Though time and intermarriages may have, in some cases, blunted these historical and biological facts; still, it is safe to say that all humans once lived in a Black-World. Scientifically at least, we know that human origin and its eventual diffusion, began in Africa. But beyond this, there is the issue of slavery. As a result, one can speak of the Afro-Caribbean, the Afro-Latino, the Afro-Asians, and the Euro-Africans, the African-Americans and the continental Africans. And others.

In the Caribbean and in Latin America for instance, the African presence is primarily due to the Trans Atlantic Slave Trade. There are various estimates, but it is widely assumed that between 1450 and 1900, some 15-25 million Africans arrived in the plantations of the New World. Brazil was the primary destination with about thirty-five percent of the slaves. This historicity accounts for why Brazil has the highest number of Blacks outside of the African continent.

To the aforelisted, we add the four percent that was taken to British North America (later the United States of America), twenty percent to the Spanish colonies, eighteen percent to British West Indies, and the rest scattered in the Danish, Dutch and French colonies. With such a large population of Blacks and people of Black ancestry in Latin America (and in neighboring Caribbean), one wonders why the political, cultural, and historical ties between both spheres are not as developed and as enriching as it should be.

In recent years, improvements in telecommunications and the internationalization of the world is helping to bridge these gaps. Still, most Latin Americans seem to see and interpret the world in terms of events in their own vicinity, Spain, Portugal, France and the United States. For the vast majority of Africans, especially the educated and cosmopolitan, the western world is what nudges and tugs at them. Latin America -- in spite of its allure and significance -- has no place in their thinking. This has to change.

Latin America is that continuous piece of topography that begins in Mexico, and by way of Central America, tops off in Argentina. It is about 21,069,501 square kilometers, with about 600 million people residing in 21 countries. Virtually all the world's known natural resources are found here. A land of almost unparalleled beauty, here you will find the Amazon and the Andes -- the world's largest river system and the second highest mountain range. This land was, for a while, was part of the French, Spanish, and Portuguese empires.

Latin America, like Africa, is eternally interesting. Both are cathedrals of pristine cultures and traditions, with evolving political and economic systems. For much of their modern history, both areas were well known for coups and counter coups, and for its legions of Big Men with predatory tendencies. Both regions are part of the Global South or developing world. In terms of basic needs, Latin America is on the faster train; but both have a lot to teach and to learn from each other, hence the need for greater cooperation and collaboration.

At the present time, there are bilateral agreement between several countries i.e. between Angola and Argentina, Nigeria and Colombia, Kenya and Brazil, and between Rwanda and Brazil. Also, the governments of Angola and Uruguay recently signed a Memorandum of Understanding on political consultations. These are commendable endeavors, but more could be done. More could be achieved. There is a lot to be said for bilateralism and multilateralism. Both should be encouraged.

Multilateral and bilateral agreements should be encouraged not just between both spheres; it should also be encouraged within and between African countries. The Southern African Development Community (SADC), the Economic Community of West African States (ECOWAS), the Common Market for Eastern and Southern Africa (COMESA), the African Economic Community (AEC) and other blocs should all work for a common purpose: the economic improvement and renewed emancipation of the continent and its people. Agreements with Latin America will not diminish inter and intra-Africans accords.

For now, whatever relationship there is between Latin America and Africa is on the periphery, too insignificant to be considered laudable. There should be bilateral and multilateral agreements that cover areas such as security, commerce, scientific and technological exchanges, educational and cultural affairs, and full fledge diplomatic exchanges. Such agreements will be to the benefit of all countries (and regions) in that these agreements will enlarge their respective political and economic space.

Perhaps it was in recognition of this that in the summer of 2008, “African and South American trade ministers gathered in Marrakesh to plan a new framework for trade between the two continents. The conference is part of a larger initiative to stimulate South-South trade under the Abuja Plan.” Indeed, this is a praiseworthy gathering, a commendable initiative. No country in the world can do without international trade; and for that matter, no country can discount the benefits and the role international trade has played in its development.

In the case of Latin America and Africa, the idea is that when the poor stand together in solidarity, there can only be mutual benefits, a win-win situation for all. Commercial activity between developing economies have steadily increased since the 1990s. Some estimates put it at over $1.5 trillion since mid-2002. It is hoped that bilateral and multilateral trade agreement between both spheres will double, if not triple, within the next decade or so. Such an improvement will help alleviate poverty and severe underdevelopment.

This is not so say that international trade (bilaterally and multilaterally) alone will spur and sustain economic development. There are other endogenous and exogenous factors that come into play. Even so, there is no doubt that the international trade has been a source of prosperity and stability.

Critics and dissenters may be right in terms of some of the predatory nature of international trade and globalization, but it is hard to ignore the fact that trade and globalization is the source of much of the world's prosperity: it has, in most countries, propelled economic growth and helped reduce abject poverty. Agreements between Latin America and Africa can only make things better: a win-win for all sides.