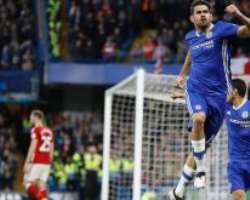 Chelsea was one more win away from taking the English Premier League title after beating Middlesbrough 3-0 on Monday.

The Blues have the chance to claim their second league title in three seasons when they face West Brom on Friday. They moved seven points clear of second-placed Tottenham, and secured relegation for Middlesbrough.

Having seen Tottenham falter on Friday with defeat at West Ham, Chelsea set about taking advantage of the opportunity to extend its lead immediately.

Twice in the opening seven minutes, Fabregas played spectacular diagonal passes to Alonso, who first volleyed onto the crossbar and then agonizingly across goal from the left.

Middlesbrough failed to heed the warning as it continued to allow Fabregas far too much space to operate, and was punished in the 23rd.

Fabregas picked out a more reliable finisher in Costa with another inch-perfect pass, the striker slotting calmly through Brad Guzan’s legs to equal his best league tally with his 20th of the season.

Cesar Azpilicueta did his best imitation of Fabregas as he found Alonso at the back post to directed his volley past Guzan in the 34th.

Fabregas switched the angle of Chelsea’s attack to play in Victor Moses on the other flank, with only a fine Guzan save preventing a third goal before the break.

The onslaught continued after halftime as Pedro’s driven effort hit the crossbar, and the relentless Alonso shot wide once more.

Middlesbrough’s resistance and any doubt over the result was ended in the 65th when Matic chested down Fabregas’ cross and shot low past Guzan to make it 3-0.

But perhaps the biggest cheer of the night came in the 84th, as captain John Terry was introduced for a cameo appearance, as he nears the end of his 19-year career with the club having announced he will depart at the end of the season.