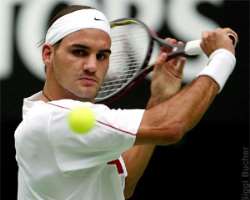 Roger Federer
Roger Federer made a confident start to his French Open title defence with a 6-4 6-1 6-2 win over Australian Peter Luczak on a searing hot day at Roland Garros on Monday.

The world number one gradually found his stride on centre court where panama hats and caps blossomed in the stands and shoulders went bare as temperatures nudged 30 degrees.

Swiss Federer, who will face Colombian Alejandro Falla in round two, treated the crowd to some exquisite strokes, pointing his finger to the ethereal skies with a self-satisfied smile after one of many cunning drop shots.

Serena Williams wore the first of seven dresses at the French Open on Monday, but her first-round match proved no catwalk as the world number one stuttered past Swiss Stefanie Voegele 7-6 6-2.

The 2002 Paris champion stooped and clenched her fist as she saw off three break points en route to a 7-2 win in the first set tiebreak after struggling to break her opponent's serve.

'I definitely didn't feel good about it. At least I won. I think I'm still in the tournament, that's what matters,' Serena told reporters. World number 76 Voegele, egged on by the crowd on Court Philippe Chatrier, lost her composure in the second set as Serena ended the contest with a routine volley after an hour and 21 minutes.