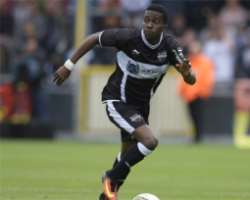 Super Eagles coach, Gernot Rohr, has extended invitation to KAS Eupen forward, Henry Onyekuru, in the list of players who are to camp in France, while again leaving out  the three active members of his team who are plying their trade in China.

Onyekuru  has 18 goals for the Belgium side in his first season in the top flight.

Rohr first omitted the China  trio last month when the Eagles converge in London for two friendly games against Senegal and Burkina Faso, but the team could only play one game as the full compliment of the squad of Burkina Faso were not given entry visa into the United Kingdom.

The reason for omitting the trio back then, was to allow them settle in their new surroundings, and this time around the coach left out the trio of Odion ighalo, Brown Ideye and John Obi Mikel who is the captain as they will be having club commitments when the team open their camp in France. Although Ideye and Ighalo are yet to really get going for their respective teams with the latter having one goal to his name, while the former has two, Mikel has found the back of the net and was largely man of the match for his team in their first three games before picking up a thigh muscle injury.

Their absence has opened the door for the manager to hand first time call up to KAS Eupen forward, Henry  However, the bulk of the team which the manager has used in previous games and camping exercise will be called up as well to make up the numbers for the team, who are going to take on Burkina Faso during their camping exercise in France. The essence of going to France for the camping is to allow the players prepare adequately for the June 10 AFCON 2019 qualifiers against South Africa in Uyo.