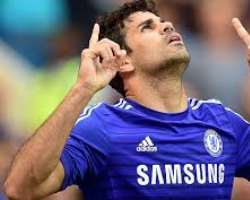 The central role that Diego Costa played in Chelsea’s 4-2 win over Southampton on Tuesday suggests the Premier League leaders are going into the season’s climax firing on all cylinders again.

Costa broke a run of five league games without a goal as he scored twice in the second half against the Saints, racking up his 50th and 51st Premier League strikes for the Londoners.

The combative Spain striker also created the opener when he cleverly dragged a pass back into the path of Eden Hazard to put Chelsea 1-0 up in the fifth minute.

It was the sharpest performance in several weeks from Costa who started this season strongly and scored 13 times in the league before Christmas but who had only found the net four times since then, until he claimed his brace on Tuesday.

The slump in Costa’s form coincided with speculation at the start of 2017 that the often tempestuous striker was on the verge of signing a lucrative contract with a club in China’s burgeoning Super League.

The Brazilian-born Costa remains a firm favourite with the Stamford Bridge fans who chanted his name throughout Tuesday’s win just as they did during his recent lean spell.

But it wasn’t always so. After a rampant first season in England in 2014/15 when he scored 20 league goals for Chelsea, Costa was among the players who most openly clashed with then manager Jose Mourinho last season and angry fans booed him after Mourinho was fired.

Chelsea coach Antonio Conte told reporters on Tuesday he had always been sure that Costa would find the net again after a run of bad luck in recent games.

“Now he must continue. It is very important for his confidence, for us, also because he scored two really important goals but also two beautiful goals after combinations which showed good … coordination between him and his team mates,” he said.

Asked about the persistent speculation that Costa might leave Chelsea after the current season, Conte said such talk seemed to be an attempt to distract his players from their target of winning the title.

“We must be stronger than this speculation because we must be compact and think that our target is really important,” the Italian said.