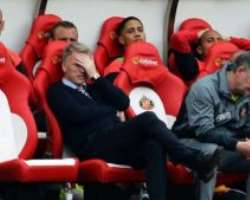 Manchester United put a spate of recent draws behind them with a routine 3-0 win at bottom club Sunderland, while Romelu Lukaku scored twice as Everton defeated champions Leicester City 4-2 at Goodison. Easy does it: Zlatan Ibrahimovic celebrates scoring for Manchester United at the Stadium of Light on Sunday.  Photo: Getty Images

They are unbeaten in their last 21 league games but Mourinho’s side, who moved above Arsenal into fifth place, are still four points behind Manchester City with a game in hand.

Liverpool, in third place, are six ahead of United having played two games more.

“We had lots of players that were not here today and the most important thing after the three points was to have no more injuries. The result was good. We resisted the results of yesterday when Manchester City and Liverpool won.”

United, who are in the quarter-finals of the Europa League, were without first-choice goalkeeper David de Gea but his deputy Sergio Romero had an easy afternoon in the Sunderland sunshine.

With a Champions League spot available for the winners of the Europa League, that is arguably their more likely route back into the elite competition and they face a quarter-final, first leg at home to Anderlecht on Thursday.

Marcus Rashford gets on the score sheet for United.  Photo: Getty Images

They then host Premier league leaders Chelsea next weekend.

“(De Gea) has a problem with his hip. When he dives he feels it a little bit. It’s good for him to have a rest,” Mourinho said. “It’s good for Sergio Romero to play before Anderlecht.

“De Gea will probably be fit for Chelsea.”

Sunderland manager David Moyes said his side would keep fighting, even if they look doomed.

They have equalled the second-worst run of Premier League games without a goal having not scored for seven games and are 10 points adrift of 17th-placed Hull City.

“We keep going. We have another home game next Saturday and we have to try and win it,” Moyes said. “We do some good things but just lack a bit of quality but it’s not for the want of trying. The boys are doing everything they can.” Everton beat Leicester

Leicester, who face Atletico Madrid on Wednesday in the first leg of their Champions League quarter-final, made five changes ahead of their trip to Spain and the defeat ended the run of five straight wins since Craig Shakespeare replaced Claudio Ranieri as manager.

For Everton, it was a fine bounce back from their derby defeat to Liverpool and the disappointment of conceding an injury-time equaliser to Manchester United in their 1-1 draw on Tuesday.

Ronald Koeman’s team grabbed the lead after 30 seconds when Kevin Mirallas broke through from midfield and appeared to be brought down but the referee, wisely, played advantage and the ball fell to Tom Davies who shot home.

Leicester struck back three minutes later though with a trademark counter-attack, Demarai Gray bursting deep into home territory before he slipped the ball to Islam Slimani and the Algerian coolly side-footed past Joel Robles.

Robles was beaten again in the 10th minute when he misjudged a curling free kick from the left from Marc Albrighton as the champions took a 2-1 lead.

Everton looked the sharper in midfield with Mirallas particularly lively and it was no surprise when they got back on level terms in the 23rd minute, Ross Barkley whipping in a superb cross from the right which Lukaku met with a perfect glancing header ???- the Belgian scoring for the eighth straight home game.

Four minutes before the end of an intense first half, Everton grabbed the lead. Barkley should have scored when one-on-one with Leicester keeper Kasper Schmeichel but the Dane managed to palm it wide for a corner and from the resulting kick Phil Jagielka rose at the back post to power in a header.

Lukaku struck again, with his 23rd league goal of the season, in the 57th minute, firing home at the back post after Leicester failed to clear a corner.

Robles made amends for his error with a superb diving save, three minutes from the end, to keep out a fine header from Leicester sub Leonardo Ulloa.

Koeman said he was pleased with his team’s performance particularly the displays of Lukaku and Barkley, who had come in for some criticism after the Merseyside derby.

“We played some fantastic football in the first 45 minutes, really good team performance today. We had great movement between the lines.

“Lukaku and Barkley didn’t need to respond (but) they showed today they are fantastic football players. Two players on a high level but the whole team played well.”