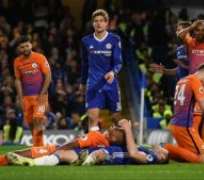 Eden Hazard 's goals in the first half were enough to guide Chelsea past a lively City who missed numerous chances and left Pep Guardiola 's men in an intense battle for the top four.

Here's what we learned from a tight, tense clash in west London.

PRESSURE KICKING IN
Stamford Bridge was a nervous place as the closing minutes arrived on Wednesday, especially after their shock loss to Crystal Palace on Saturday which let Tottenham Hotspur back in the title race.

With Chelsea leading 2-1 against City, Conte looked to the crowd and urged them to get behind their team after yet another nervous lull. They responded but Chelsea limped over the line and Conte revealed afterwards that the pressure was intense in such a crucial moment of the campaign.

Thibaut Courtois saved late on from Sergio Aguero and then John Stones somehow shanked an effort over the bar from five yards out to let Chelsea off the hook.

If the game ended in a draw Conte and his players could have no complaints but, just as they have done for most of this season, Chelsea found a way to dig in and win.

At the final whistle their fans were relieved more than anything. With Spurs pulling off a miraculous late win at Swansea, Chelsea holding on for three points was a massive result both on the night and in the run-in. Chelsea still have all of the chips stacked in their favor in the title race.

MIXED CHELSEA
Eden Hazard finished superbly on two occasions in the first half to lead Chelsea to victory yet again as the Belgian playmaker stepped up to be the Blues' main man.

Speaking after the game Conte was delighted with Hazard and revealed the message he has to his players.

“He is an important player and I think also his growing in his mentality. I think he is playing a really good season,” Conte said. “This season, for all my players and for me, we will remember this season if we win. If you don't win, it's a good season, good job, usually I like to say only those we win write the history.”

With Hazard coming up with the goals (albeit a weak shot which should've been saved and a rebound from a missed PK) he stood up when his team needed him, but Chelsea had some mixed displays suggesting some players aren't coping with the run-in well

Diego Costa , once again, had an off day and he's now scored just four goals in his last 12 games in all competitions for Chelsea. His hold up play was off and his own fans often lambasted him from the stands. It would not be surprising if Chelsea's leading scorer left for China, or elsewhere, in the summer.

In goal the usually unflappable Thibaut Courtois had a nightmare for City's goal, pinging the ball straight to David Silva and showing a severe lapse in concentration at a pivotal moment in the game. If it wasn't for City's slack finishing then Courtois could've been punished for his error.

Even though Chelsea are cantering towards the title, the ruthlessness of Conte will surely mean he'll remember these moments and act on them over the summer.

CITY FAR OFF
After the game Guardiola said he was “lucky to have his players” and praised Man City's display, saying they “absolutely” were the better team.

Speaking after the game Guardiola was pleased with the performance, even though finishing chances remains a huge issue.

“It's an honor to have the amazing players I have. We come here to Stamford Bridge and play the way we have, with huge personality. I'm a lucky guy to manage these guys. It's encouraging for the future. I'm optimistic,” Guardiola said. “It's been like this all season but in the boxes we are not good enough. We created enough to score goals. It's our problem. But my players play in one way and that's why I want to be here – to help Man City for years. The people who are watching us must be proud of our fans. We did everything.”

Sergio Aguero and John Stones both missed chances, the latter a gilt-edge opportunity from five yards out with a minute to go which would've snatched a point.

Vincent Kompany 's return from injury was a huge positive, while Guardiola praised Fabian Delph 's return too, but the fact that City are 14 points behind leaders Chelsea shows how far they are behind where they should be.

Guardiola can take all the positives he wants from the performance but the project is far behind where many thought it would be when he took over last summer. The Spaniard has serious work to do this summer