Bournemouth come from behind to draw 2-2 with Liverpool 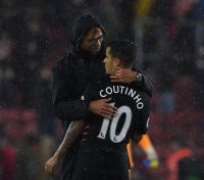 Artur Boruc gave Bournemouth a chance, and Joshua King  took advantage of it.

Bournemouth came back to draw Liverpool 2-2 at Anfield on Wednesday, another Reds disappointment against a bottom half side and a 35th point for the Cherries.

Philippe Coutinho and Divock Origi scored for Liverpool, with Benik Afobe and King netting for Bournemouth.

Liverpool went behind in the seventh minute, as Georginio Wijnaldum made a pitiful back pass that sent Afobe 1v1 with Simon Mignolet . He didn't miss. 1-0.

It was all Reds moving forward, and Wijnaldum cleaned up a poor corner clearance and left a mark on a low shot that Artur Boruc dove to save.

Coutinho looked dangerous for most of the half, and defied Boruc to score a 40th minute goal after Roberto Firmino flicked him through on goal.

Nathaniel Clyne needed less than three minutes to inject some fire into the second half with a Goal of the Year contender… that sadly hit the woodwork after Boruc made a tremendous save.

Wijnaldum's fast footwork opened him up to chip a 59th minute pass to Origi, who headed home from close range.

But the Reds couldn't put away the Cherries, and Jurgen Klopp took off Coutinho and went to a back three. It did not go well.

King was Johnny-on-the-spot to make it 2-2 with minutes to play.

Joel Matip almost tapped in a corner moments later, and Boruc foiled a point blank header from Ragnar Klavan in the second minute of stoppage.