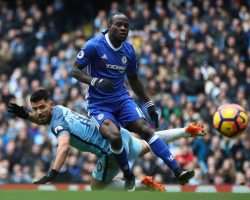 Victor Moses has been injured since Chelsea's 2-1 win over Stoke City in the middle of March, missing Nigeria's match over the international break and then Chelsea's 2-1 loss to Crystal Palace on Saturday. Now, it seems “likely” that he will be missing at least one more game for the Blues as he remained absent from training on Monday.

Conte is again likely to be without Victor Moses for the visit of Manchester City as the wing back did not train on Monday because of a toe injury.

-source: Telegraph
On Saturday, it was Pedro who deputized for Moses at right wing-back, with Cesc Fàbregas filling in at Pedro's usual spot as the nominal third forward in the 3-4-3. The tactical setup seemed to pay dividends almost straight away, but Chelsea were unable to find the net again after Cesc's fifth-minute opener.

Against City, Conte might perhaps opt for a more defensive look, with César Azpilicueta pushing wide and Kurt Zouma filling the middle … or he might keep things more attacking with maybe Willian coming in up front and Pedro staying at wing-back?

Either way, it's not going to be ideal.