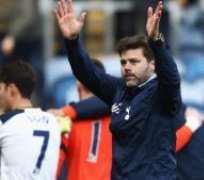 Mauricio Pochettino isn't getting ahead of himself but he says Tottenham must “dream” of catching Chelsea and winning the Premier League title.

Following Chelsea's defeat to Crystal Palace at the weekend and Spurs' victory at Burnley, Pochettino's youngsters are now seven points behind the league leaders with nine games to go.

Speaking ahead of Tottenham's clash at Swansea City on Wednesday, Pochettino discussed their title hopes.

“Seven points is a massive difference. For us, we have to be focused and try and win games. Our challenge  is to win the next game. It is a reality that we are there, second in the table. Now, it's the last period of the season we must be focused and concentrate and give our best and try to fight,” Pochettino said. “In football, nothing is impossible. That is our idea, our philosophy and we need to keep going in that direction.

“It's true that the Premier League is tough to play and win every game and compete because it is so competitive. It can happen, yes, of course. It can happen. Our mind must be positive and try to imagine and dream and believe.”

Tottenham are looking to make the most of any Chelsea slip in the coming weeks and after months of the Blues running away with things atop the table, suddenly there's a question mark lingering around Conte's men following the shock defeat to Palace.

Pochettino also gave a lengthy injury update as he admitted it is unlikely midfielder Harry Winks will play again this season after injuring his ankle in the victory at Burnley, while both Harry Kane and Danny Rose have stepped up their training as they return from injury.

Spurs have a more favorable schedule than Chelsea in the final six weeks of the season and if they beat Swansea on Wednesday and Watford in the early game on Saturday, then they could be just one point behind their London rivals if Antonio Conte 's lose to Manchester City on Wednesday.

All of a sudden, you get the sense that Spurs are enjoying hunting Chelsea down.

With key players set to return for the run-in, plus an FA Cup semifinal between Spurs and Chelsea on Apr. 22, things are getting very interesting between the top two.

After they came up short last season to Leicester and collapsed in the final weeks of the season, Pochettino will be hoping his young squad will have learned from that experience and help them in the big weeks to come.