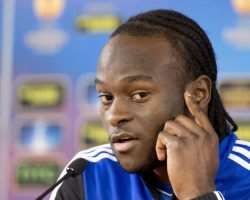 Chelsea's lead at the top of the English Premier League was cut to seven points after they suffered a shocking 1-2 home defeat.

They lost to Crystal Palace, while Tottenham beat Burnley 2-0.

Conte's side had won their past 10 league games at Stamford Bridge and had not lost there in any competition since Sept. 16.

Conte explained his decision to play Pedro Rodriguez at right-wing back in the absence of the Nigeria international in the 2-1 defeat to Crystal Palace on Saturday.

“Victor Moses is an important player because he's having a great season, but Pedro played very well in that wing-back position,” Conte told Chelsea's official website.

“As wingers, they are very offensive and that showed we wanted to play our football. Pedro had a very good game.”

NAN reports that Moses' injury setback prevented him from playing in the international friendly against Senegal last week in London.

Conte also said his side's shock home defeat against Crystal Palace perfectly demonstrated why he has always maintained that the Premier League title race is far from over.

The Blues could have extended their lead at the top of the table to 13 points had they won and Tottenham lost.

“It makes it more interesting in the championship.
“I always said that the league finishes when you have the mathematical team who won, otherwise you must fight and play every game to win, because in England there doesn't exist an easy game,” Conte said.

Chelsea looked set to earn a 14th consecutive home victory in all competitions when Cesc Fabregas scored inside four minutes.

But two goals in two minutes put Palace ahead and they held on in spite of Chelsea enjoying more than 70 per cent of possession and having 24 attempts on goal.

“We deserved at least to draw, because I think we created many chances to score,” Conte added.

“We dominated the game against a very strong team with good players. It's a pity but it wasn't our day. They are a good side.”(NAN)