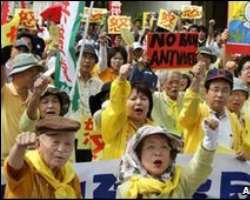 Japanese Prime Minister Yukio Hatoyama has apologised for not keeping an election promise to move a US military base from Okinawa.

Like many locals, the governor is opposed to the US presence and said the prime minister's decision would be “difficult to accept”.

Japan and the US, allies since the end of World War II, say the base is needed to guarantee regional security.

The prime minister promised to move the base off the island during the campaign for last year's election which swept his Democratic Party of Japan to power.

But he said that after holding talks within Japan and with the US, the Futenma base had to remain on Okinawa although it would move to the less populated coastal district of Henoko – in line with a plan announced in 2006.

Humiliating climbdown
He said that the base was needed because the “security environment in East Asia remains fragile”, pointing to heightened tensions in the Korean peninsular.

“I apologise to people in Okinawa as I could not keep to my word,” the prime minister said.

“I must tell you that your decision is extremely regrettable and very difficult to accept,” a grim-faced Mr Nakaima replied.

Last month, nearly 100,000 people staged a protest on the southern island, demanding that the base be removed.

Islanders have been angered by incidents involving US troops based there, including the 1995 rape of a 12-year-old Japanese girl and a helicopter crash in 2004.

Other complaints have focused on noise levels and objections to the US military use of Japanese land.

The row has also damaged Tokyo's relationship with the US.

The BBC's Roland Buerk in Tokyo says it is a humiliating climbdown for Mr Hatoyama.

Our correspondent says the search for an alternative location has proved fruitless.

Polls suggest Mr Hatoyama has been losing popularity in recent months and analysts say this decline is likely to be exacerbated by his U-turn over Okinawa.

Elections to the upper house of parliament are due in July.