SOUTH AFRICAN ANDILE JALI SENT TO US FOR HEART TESTS 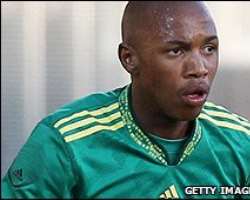 South Africa have sent Orlando Pirates' midfielder Andile Jali to the United States to see experts after tests discovered he has a heart condition.

Jali made his international debut earlier in the year and has a mild cardiovascular condition detected in routine tests on the 30-man squad.

The 20-year-old will now travel to the United States to get a second opinion.

Jali is expected to be back with his South Africa team-mates before 31 May which is when the squad is finalised.

“[We are] heeding a doctor's recommendation that Jali travel to the University of Florida Gainsville Medical Centre in the United States as this facility has a track record of dealing with athletes in this area of medicine,” a statement from the South African Football Association said.

“It is envisaged that Jali's tests will be performed in time for him to be available for the finalisation of the squad.”

Meanwhile, Everton's Steven Pienaar has joined up with his South African team-mates at their World Cup training camp.

The 28-year-old midfielder arrived on Friday morning and underwent a series of physical and medical tests.

The hosts also have games against Columbia and Denmark, before kicking-off the whole World Cup against Mexico on 11 June.