Nigeria 1-1 Senegal: How The Mail reported the international friendly 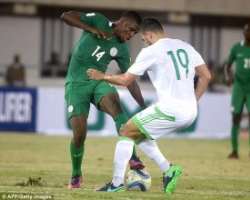 At the final whistle, almost all of the 2,013 fans at Barnet’s Hive stadium charged onto the field.

They weren’t celebrating the result – a drab draw played out with some commitment, but little quality – but simply the bizarre fact of the occasion. International football at Barnet.

Most of the fans – some of whom were young, but many old enough that they might have known better – headed in search of Sadio Mane, who had come off the bench to a rapturous ovation on the hour. Goal: Sow
Ref: Anthony Taylor
He, like Alex Iwobi, Ahmed Musa and a host of other Premier League stars, seemed to be enjoying the impromptu invasion, but, if truth be told, it masked a fairly poor spectacle.

The attendance wasn’t as poor as some at the club feared earlier in the week, with most fans turning up on the night and queuing to get in until well after kick off, but it was still less than half as many as came here to watch Barnet play Portsmouth earlier in the season.

Those who did brave a freezing night in north west London – and it was an odd collection, with a large group of Nigerian supporters on one side of the stadium, and mostly younger fans screaming for Mane’s introduction on the other – were rewarded with football that would scarcely have looked out of place in League Two, though a second-half goal apiece did give them something to shout about. Senegal bossed the midfield, Idrissa Gueye, as ever, presiding over it all with calm and quality, but Moussa Sow up front is far less mobile than Mane, and looked very ordinary until Daniel Akpeyi dropped a 53rd-minute corner into his path for the opener.

Nigeria, who didn’t qualify for AFCON 2017, have a theoretically exciting attacking core, but neither Leicester’s Musa nor Arsenal’s Iwobi are in form – as for Kelechi Iheanacho, he can barely get a game for Manchester City. Of the Premier League contingent only Wilfred Ndidi showed himself in a good light.

Iwobi was particularly erratic, hooked on the hour after a performance notable far more for its errors than any incision in the No 10 role. Iheanacho did get two glorious chances to score, scuffing a shot across the goal from 18 yards, and then somehow prodding wide from point blank range. If Pep Guardiola was watching, this would not have impressed him.

The City starlet managed to redeem himself with 10 minutes to go, gliding onto a through ball and brought down by Pape Ndiaye, before getting up to convert the penalty and equalize. It was probably deserved, if only for Iheanacho’s persistent running.

He might even have won it with a snapshot wide in stoppage time, but neither side really did enough to win the game, or to entertain the sparse crowd – at least until the final whistle, at which point it became clear that the real buzz around the Hive was at the chance to get a selfie with the stars.