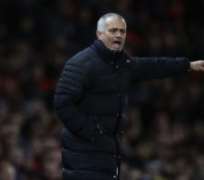 Manchester United moved up to fifth in the Premier League as goals from Marouane Fellaini, Jesse Lingard and Antonio Valencia were enough for a 3-1 win over Middlesbrough at the Riverside Stadium on Sunday afternoon.

The Red Devils had been on the 6th position in the Premier League for over 100 days, which triggred jokes that the Club had made that position their own.

After a bright start from the hosts, the Red Devils started to take control of the match, especially in wide areas, and that is where the first goal came from as Ashley Young’s cross from the left was headed home at the back post by Fellaini. United doubled their lead not long into the second period as Lingard countered unchallenged for the visitors and ignored options to his left and right to hammer a fine finish into the top corner from 20 yards.

However, the away side had former keeper Victor Valdes to thank as his slip late on allowed Valencia a tap-in as a woeful error summarised the dire situation the Teesiders find themselves in as their seemingly inevitable trip towards relegation edged ever closer.