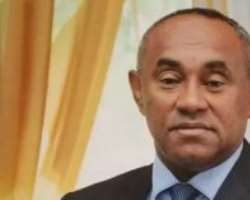 Ahmad Ahmad of Madagascar been emerged the new president of the Confederation of African Football (CAF).

Ahmad polled 34 votes to troince the incumbent Issa Hayatou who has held sway in that position for over 28 years.

Hayattou got 20 votes in an electionmany thought he would easily win. It is believed that Ahmad had a tacit backimg of Fifa President Infantino who would prefer a clear of Sepp Blatter loyalists in the global football setup.

The Madagascan emerged in a general elections held on Thursday, March 16 in Addis Ababa capital of Ethiopia.

CAF has only ever had five presidents in its 60-year history and the last time a new leader was appointed was way back in 1988 when Issa Hayatou was emerged president.