Chelsea having N'Golo Kante is 'unfair' to rivals: Pat Nevin 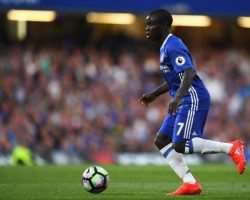 Chelsea having N’Golo Kante in their side is “bordering on unfair” on the Premier League leaders’ rivals, according to Pat Nevin .

Kante joined the Blues from Leicester City last summer, which initially raised eyebrows given that the Foxes had only just secured a surprise title triumph.

But the Frenchman’s decision has been vindicated in spectacular fashion and he is now a key member of Antonio Conte’s 3-4-3 system, as well as a frontrunner for the PFA Player of the Year award .

Kante scored the winner in last night’s FA Cup quarter-final victory over Manchester United to take his Chelsea tally to two strikes in 30 appearances this season.

And Nevin is adamant the west Londoners’ competitors have little hope of stopping Kante should the midfielder successfully find the net more regularly.

“If you use the word dynamism, I believe you are legally obliged to say the name N'Golo Kante in the same sentence,” Nevin told Chelsea’s official website.

“If he actually starts regularly scoring goals like the one he smashed in to win this tie, then it is just bordering on unfair on the rest of the teams.

“Once again he was exceptional, world class and no one deserved the goal more than him.”

Chelsea legend Frank Lampard has lavished a similar level of praise on Kante by describing the France international as the best midfielder in world football.

Mauricio Pochettino’s men are one of four teams to have beaten Chelsea this season but Nevin believes Conte’s players have plenty left in the tank ahead of the run-in.

“This is turning into a memorable season with many special games,” added the former Blues winger.

“There are a few more to come because the team is to my mind actually improving during the run-in.”