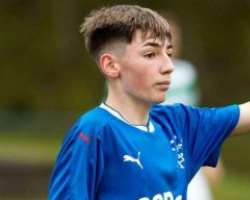 Two of the brightest young talents in European soccer could be heading to Chelsea.

Adrian Kajumba of the Daily Mirror reports that highly-touted Glasgow Rangers teenager Billy Gilmour and Ajax teen sensation Daishawn Redan are both close to signing for the Premier League leaders.

Gilmour, just 15, has already been involved in training with Rangers' first team this season, was close to making their first team squad for a recent cup game and the midfielder plays for Scotland at U-20 international level. Per the report, Gilmour is wanted by Barcelona, Bayern Munich and both Manchester City and Manchester United.

As for Dutch youth international Redan, the 16-year-old striker is also being tracked by Chelsea with City, United and RB Leipzig all said to be interested in enticing the youngster away from Ajax despite the Amsterdam club having an exemplary record of bringing through and nurturing young talent.

Chelsea's policy of stockpiling the best young talent in Europe has come under plenty of criticism in recent years but it's hard to stop their model.

The Blues currently have over 40 players out on loan across the UK and Europe, with plenty of the most talented youngsters in the game signed up. Yet, when you look to their first team in recent years its tough to see any of their academy products who've broken through.

Yes, Nathaniel Chalobah , Nathan Ake and Ruben Loftus-Cheek are all in the first team squad but all three have struggled for regular minutes this season.

Reports linking Chelsea with a move for Gilmour and Redan seem very similar to that of Karamoko Dembele heading to Manchester City . Videos of the 13-year-old playing have gone viral and he has already played for Celtic's U-21 side in Scotland.

If you were a youngster, where would you go? To Chelsea, Manchester United or Barcelona for big bucks, or to a team like Ajax, Southampton or Celtic where you'll likely get regular minutes and develop at a faster rate?

It's an intriguing situation to be in for these young players and if you look at the players who have come through Chelsea's academy and ended up joining other clubs after loans spells, most have gone on to very successful professional careers.

Below is video of Gilmour and Redan, who could be the next big things on the block in west London…