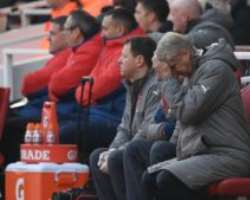 Arsenal's Chairman Sir Chips Keswick has spoken out about Arsene Wenger 's future at the club.

The high-ranking official has broken the clubs silence on Wenger's current situation as the 67-year-old Frenchman will be out of contract in the summer but it is believed he is considering signing a two-year extension to remain in charge of the Gunners.

Amid protests from fans before and during the 5-1 UEFA Champions League defeat to Bayern Munich on Tuesday, plus angry reaction to Alexis Sanchez being benched last week following a reported training ground bust-up, Keswick revealed that a decision on Wenger's future will be a mutual one.

“We are fully aware of the attention currently focused on the club and understand the debate,” Keswick said. “We respect that fans are entitled to their different individual opinions but we will always run this great football club with its best long-term interests at heart. Arsene has a contract until the end of the season. Any decisions will be made by us mutually and communicated at the right time in the right way.”

The fact that the club have felt the need to comment on this situation says a lot.

Whether it be Sir Chips or CEO Ivan Gazidis, they rarely speak on the record. However, this is an exceptional circumstance and these comments will act to calm down an angry section of Arsenal supporters — around 200 fans held banners and protested out the Emirates Stadium on Tuesday — who are putting the blame squarely at Wenger for the Gunners not winning a Premier League title for the past 12 seasons.

Not content with 20-straight top four finishes under Wenger, plus three PL titles and six FA Cups, the Arsenal fans are making themselves heard and it appears both Wenger and the board are listening.

Wenger said himself on Thursday that he will take the mood of the fans into consideration when he makes up his mind on what he'll do beyond this season.

The dilemma for most Arsenal fans in this situation is clear: if Wenger goes, will anything really change?

Arsenal don't pay the biggest wages in the Premier League and it is unlikely the likes of Alexis Sanchez and even Mesut Ozil will stay at the Emirates even if Wenger decides to remain. With Diego Simeone, Max Allegri and Ronald Koeman suggested as potential replacements for Wenger, it's unclear if any of those coaches would seriously want to follow on from one of the greatest managers in history. It is also unclear if they can do any better than getting a top four finish, winning a domestic trophy and getting to the knockout stages of the Champions League most seasons.

A healthy dose of perspective seems to be lost among some Arsenal fans. Be careful what you wish for.