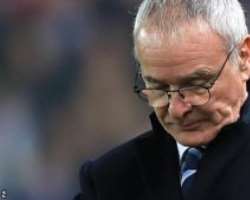 Manager Claudio Ranieri has been sacked by Leicester City, nine months after leading them to the Premier League title.

The Foxes are one point above the relegation zone with 13 matches left.

“The board reluctantly feels that a change of leadership, while admittedly painful, is necessary in the club’s greatest interest,” read a statement.

Ranieri, 65, guided the Foxes to the title despite them being rated 5,000-1 shots at the start of the campaign.

His departure comes less than 24 hours after a 2-1 defeat at Spanish side Sevilla in the first leg of their Champions League last-16 tie.

The Foxes took the Premier League title by 10 points but have won just five top-flight games this season, and could become the first defending champions to be relegated since 1938.

They have lost their past five league matches and are the only side in the top four English divisions without a league goal in 2017.

“His status as the most successful Leicester City manager of all time is without question,” added the Foxes statement.

“However, domestic results in the current campaign have placed the club’s Premier League status under threat.”

Earlier this month, Leicester gave their “unwavering support” to the Italian, who was appointed manager in July 2015 and signed a new four-year deal in August 2016.

“After all that Claudio Ranieri has done for Leicester City, to sack him now is inexplicable, unforgivable and gut-wrenchingly sad,” said former Foxes striker Gary Lineker.

BBC sports editor Dan Roan said: “Ranieri was told he was sacked on Thursday afternoon in Leicester once the team returned from Spain, but the suggestion is the owners decided before that defeat by Sevilla.

“The decision was taken very reluctantly but the club’s owners are desperate to avoid relegation and its consequences.

“A news conference with assistant manager Craig Shakespeare will take place at the stadium at 13:00 GMT on Friday.” ‘Club interests above sentiment’

“This has been the most difficult decision we have had to make in nearly seven years since King Power took ownership of Leicester City. But we are duty-bound to put the club’s long-term interests above all sense of personal sentiment, no matter how strong that might be.

“Claudio has brought outstanding qualities to his office. His skilful management, powers of motivation and measured approach have been reflective of the rich experience we always knew he would bring to Leicester City. His warmth, charm and charisma have helped transform perceptions of the club and develop its profile on a global scale. We will forever be grateful to him for what he has helped us to achieve.

“It was never our expectation that the extraordinary feats of last season should be replicated this season. Indeed, survival in the Premier League was our first and only target at the start of the campaign. But we are now faced with a fight to reach that objective and feel a change is necessary to maximise the opportunity presented by the final 13 games.” What next?

Leicester’s next game in their fight for Premier League survival comes when they host Liverpool on Monday.

Assistant manager Craig Shakespeare and first-team coach Mike Stowell will take charge of the squad until a new manager is appointed.

Ranieri’s compatriots Paolo Benetti and Andrea Azzalin, both key members of his coaching staff, have left the club.

“The board will now begin the recruitment process and will make no further comment until that process is completed,” Leicester added. ‘Dilly ding dilly game’s gone’ – social media reaction

Analysis – ‘How can Claudio be gone?’

BBC Radio Leicester’s Ian Stringer:
“I can’t believe it. I was in Seville on Wednesday, they got an away goal and the fans were really happy on the streets after Jamie Vardy scored.

“He’s gone. How can Claudio be gone? The greatest achievement ever. They are not in the relegation zone, the stadium has been singing his name and it’s been very loud.

“I think there will be a split. He is a hero, they could build a statue of him in the next month and no-one would bat an eyelid, the greatest manager ever at this club. But is he the man to get you out of a relegation fight?

“The chairman is a Thai businessman; a billionaire; a very successful man. He kept the faith with Nigel Pearson when he struggled but brand Leicester City is very different these days.

“A big decision, a big call, but still surprising.”

A year (and nine days) in the life of Ranieri

2 May 2016: The Foxes are crowned champions of England for the first time in their history as Tottenham draw at Chelsea.

15 October 2016: The Foxes are hammered 3-0 by table-topping Chelsea at Stamford Bridge.

22 November 2016: Leicester secure top spot in their Champions League group with one game to spare.

7 February 2017: After a run of two wins in 15 league games, Leicester give Ranieri their “unwavering support”.

23 February 2017: Ranieri is sacked.
Ranieri was appointed Leicester manager in July 2015, winning just over 44% of his league matches